VW’s Golf 8 GTI is almost there in SA: 8 facts you need to know

• The local rollout is planned for the third quarter of 2021.

Hot hatches are no more iconic than Volkswagen’s Golf GTI.

South Africa has welcomed all generations except the first and is patiently waiting for the local launch of the eighth offering, due to hit the market in the third quarter of 2021.

The latest version is the fastest to date and has a turbocharged 2.0-liter engine that produces 180 kW and 370 Nm – almost 100 kW more than the very first example.

A symbol of achievement

Performance models from other automakers like Peugeot, Suzuki and Toyota all once had their own GTI models, but the birthplace of the famous three letters undoubtedly comes from Wolfsburg.

Do you think the eighth generation Golf GTI will continue the rich legacy of its predecessor? Email us or share your thoughts in the comments section below.

Just because of the number of GTIs as opposed to the normally equipped ones, South Africans are not afraid of price tags, and there are all indications that the new offering will continue to thrive locally.

While local petrolheads await the eagerly anticipated arrival of the eighth generation Golf GTI in SA later this year, here are a few things you should know about the iconic hatch.

The GTI continues to rely on a four-cylinder gasoline engine. This started in 1976 as an 81 kW injection engine, but now the new version has more than double the output – 180 kW. The first-generation Golf sprints from 0 to 100 km / h in 9.2 seconds and has a top speed of 182 km / h. Back then, the mid-range sedans were fighting for the 160 km / h mark. With an electronically limited top speed of 250 km / h, the new GTI is running out of breath The combination of tires and rims on a car is the crucial link in order to optimally transfer the drive power to the road. The look is essential, almost 50% of the overall appearance is due to the rims – the GTI has had enough over the decades.

5,000 Golf GTIs were planned and more than 2.3 million were built Anton Konrad, then head of the press department at Volkswagen, says: “Our goal was a sporty series-production Volkswagen with a little understatement. We wanted to build 5,000 of these cars that you can go shopping or drive on the racetrack. ”In the run-up to the IAA 1975, sales were not particularly optimistic:“ We won’t even sell 500 of these GTIs. ”Ultimately, 500 Golf GTIs weren’t sold, but more than 2.3 million. 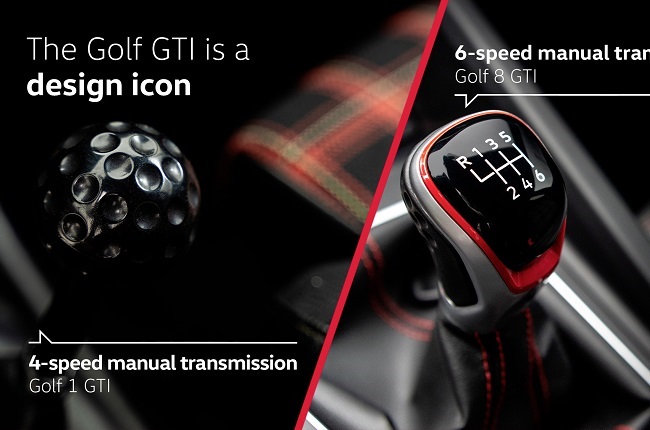 Changes in the GTI interior design

Star designer Giorgetto Giugiaro created the appearance of the Golf in Turin. The then design director Herbert Schäfer installed the legendary red GTI trim in Wolfsburg. The iconic checked design, on the other hand, comes from the first woman in the Volkswagen design department – Gunhild Liljequist. Visiting London on a tour of Great Britain was inspiring for her.

Black was sporty enough, but she was looking for a second color with a powerful, sophisticated effect – and decided on red. The golf ball design for the gear knob on the 4-speed gearbox was also her idea. That still adorns the 6-speed transmission of the eighth generation Golf GTI. As an option, you can also order the vehicle with a 7-speed dual clutch transmission and shift-by-wire. The GTI now has a new multifunction sports steering wheel with touch controls, perforated leather and GTI buckle. The first GTI already had a three-spoke steering wheel of a similar type: fans affectionately called it the “spittoon steering wheel” – as the Wolfsburg logo was in a deep recess – and is still a collector’s item to this day. In the Golf GTI Cabrio, the electrohydraulic system opens the convertible top in 9.5 seconds, and it takes eleven seconds to close at 30 km / h. With the roof closed, a speed of 237 km / h could be achieved. In the months before it was discontinued, the GTI Cabrio was officially referred to as the “most powerful open Volkswagen”. Of course, the Porsche 918 Spyder or the Lamborghini Huracán Spyder were the most powerful cars that the group produced. Nevertheless, after production of the Golf R Cabrio was discontinued, the Golf GTI Cabrio was the fastest car without a roof from Wolfsburg. To quote the brochure, “Your personal trainer recommends 30 minutes of exercise every day. Fortunately, he didn’t tell you what to exercise with.” To secure a Golf GTI Adidas from the limited edition of 4,410 copies, you had to get out of the way quickly in 2012. Then you could sit on one of the sports seats that were embroidered with the ‘Adidas’ logo and the three famous stripes ran down the middle.

The first GTI that communicates The current model is the first VW production vehicle to be equipped with Car2X communication. Other cars use a WiFi connection to warn in milliseconds of impending dangers, such as the end of a traffic jam or a dangerous spot. The innovative Vehicle Dynamics Manager takes performance to the next level. This means that the Golf GTI is not only a sports car, you also benefit from improved safety features. By the way: A modern VW contains ten times as much software as a current cell phone.

Global research report on the trend towards ...